The rugged Kalahari semi-desert of South Africa’s Northern Cape was first occupied by the San Bushmen, one of the oldest living peoples in Africa. The name of the area is derived from the San word ‘Kgalagadi’, meaning ‘waterless place’. Here, under the 40⁰C blazing summer sun, remote towns like Kuruman and Kathu, or the literally-named Hotazel, are well known for their rich deposits of ferrous metals under the arid soil.

15km south of Kathu, surrounded by a protected heritage site of Camelthorn trees, South African mining company Assmang, which is jointly owned and controlled by diversified miner African Rainbow Minerals Ltd (ARM) and mining holding company Assore Ltd, commissioned the construction of its most ambitious project yet, the Khumani iron ore mine.

DRA was initially appointed as study manager following a successful tender and in 2006 DRA was awarded the EPCM contract and appointed as the managing contractor to build a plant that would deliver 10Mtpa of high grade ore in phase 1.

A long time player in such areas as coal, gold, platinum and diamonds, the project presented DRA with its first major iron ore execution project, as well as the largest project it had undertaken to date, which demonstrates our capability in delivering large multi-faceted projects successfully ahead of time and under budget. In spite of this being new territory for us, Assmang, chose to work with DRA on the basis of past relationships and the confidence that we could make it happen, which we did. The entire project over a period of 8 years was characterised by partnership and close relationships. Assmang wanted a development partner who would jump into the deep end with them – DRA delivered and continues to deliver with further work on the project.

Work on phase 1, known as the BKM project, commenced in 2006 with the construction of the 10Mtpa processing plant. Phase 2, started in 2009, was the Khumani Expansion Project (KEP) which would increase the mine’s processing capacity to 16 Mtpa. DRA then went on to build a WHIMS plant (wet, high intensity magnetic separation) at Khumani, completed in 2013, the first such plant built for iron ore in South Africa and another first for DRA. 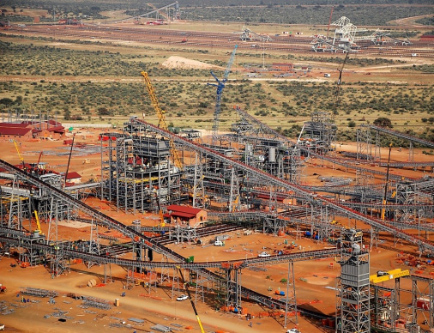 Khumani is characterised by its massive processing capacity, the sheer scale of its infrastructure and its system efficiencies.

Khumani’s ore is transported from the open pits by haul trucks to the mine’s crusher plant, consisting of a gyratory primary crushing unit, scalping station and a cone crushing unit for secondary crushing. Crushed ore from the two mines are conveyed overland to the ROM stockpiles at the Parson plant.

The ore is stacked onto and reclaimed from the ROM stockpiles to feed the now 16 Mtpa Parson beneficiation plant’s on and off grade streams. Once processed and contaminates removed via the jigs, the product is transferred to the product stockyard, ready to be loaded via rapid rail loadout stations and railed to the port of Saldanha on some of the world’s longest ore trains.

A blueprint for quality /

For DRA, Khumani became the differentiator that catapulted us to the level of world-class engineering and construction capacity. Despite this being a mega project for us, we executed it successfully thanks to our dedication to zero defect results. Khumani tested DRA’s ingenuity, flexibility and resourcefulness to the limit. Also at that time there was a severe skills shortage in South Africa, which required our small team of engineers to redouble their efforts. We succeeded because we were quality driven and implemented rigorous quality control procedures to ensure a world-class facility. Indeed, the challenge of dealing with unprecedented volumes and scale drove us to developing processes and procedures that now enable DRA to compete in the mega project arena.

For Assmang the Khumani project resulted in a long-term partnership with DRA. The client benefited from our fast and professional pace of work and from our ‘can do’ attitude to tackling anything new. We met our targets and coped with all the demands of the project. This included scheduling a number of critical plant shutdowns during the construction of phase 2, an operation which took 10 months of meticulous planning. Through our careful preparation and exceptional cooperation and teamwork with Assmang and Khumani Mine, DRA managed to implement the upgrades with minimal impact on Assmangs’ operations.

DRA and the project prides itself on its ability to have worked safely. A Total Safety Culture has been established through the project team’s leadership, behaviours of people, processes and conditions on site. The workforce was encouraged to actively care for one another through the People Based Safety approach. We achieved an exemplary overall LTIFR score for the project of 0.09 over more than 24 million manhours worked.

Since phase 1 of the Khumani project, DRA has been a preferred engineering partner and Assmang has requested to have the same team involved in further work. Khumani was not just about completing on time or ahead of time, and within or below budget – it was also about integrated teamwork, best quality processes and expert engineering and construction practices.

Project manager JC Heslinga concludes: “At Khumani, Assmang and DRA developed friendships and professional respect that will stay with the team for the rest of their lives.”